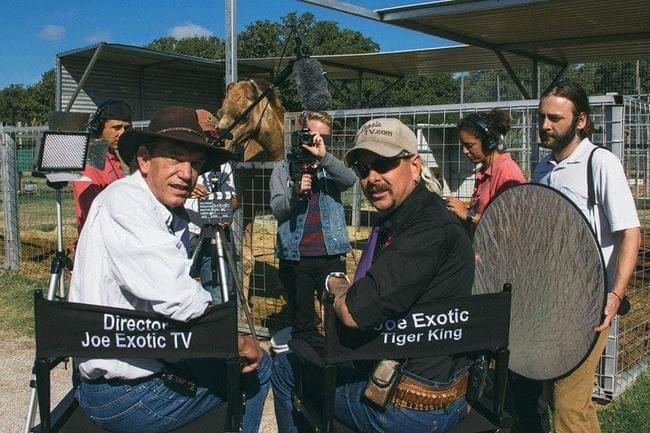 Rick Kirkham, the veteran television journalist and producer recently featured in Netflix’s “Tiger King” as the onetime producer of Joe Exotic’s reality show, will stream live for fans of the show this Saturday, April 11, at 2p.m. ET/ 11a.m. PT, hosted by journalist Per Sundnes. Kirkham, now living in Norway, will share untold stories from his time at the Greater Wynnewood Exotic Animal Park, unseen footage of Joe and others featured in the show, and answer questions from viewers live. Watch a trailer, featuring some of Kirkham’s footage, here and gain access to the stream here.

Viewers can submit questions for Kirkham by posting a video on Instagram or Twitter with the hashtag #AskTigerRick, or by sending an email to asktigerrick@allthingslive.com.

“I’m blown away by the response to Tiger King,” says Kirkham. “I live in the Arctic Circle now and I can’t even walk outside without someone pointing and saying, ‘look!’ It’s raised a public conversation about keeping big cats as pets or in zoos, and for that I am very happy.

“I’m looking forward to sharing my experiences that weren’t included in the doc,” Kirkham continues. “Joe’s emotional side, his desperate need for attention and fame and how it feels to live with wild animals as I did for a year, plus the truth about Travis. There are some things fans of the show might not be expecting. Joe was terrified of big cats, and he had plans to release all the animals on the park if someone tried to shut his zoo down. He wanted as many people to be injured as possible if they tried to take his zoo away.

Kirkham, a longtime journalist and Inside Edition anchor, spent a year living at the G.W. Zoo in contract with Exotic to produce a reality show—filming everything that Exotic and his rotating, sometimes motley, cast of companions did. In 2015, all of the footage recorded for the show burned in an unsolved suspected arson, and Kirkham shortly thereafter left the property. As one of the people closest to Joe, he had unfettered access to the goings on of the park and has plenty of stories to tell.

Host Per Sundnes has worked as a journalist, TV and radio host in Norwegian media for the last 20 years, interviewing icons including Nelson Mandela, Elton John, Beyoncé, Bruce Springteen, Madonna, U2, Yoko Ono, Damian Hirst and many more.