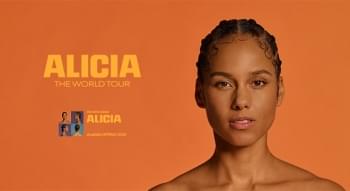 Alicia Keys is back with new music! She just announced the release date for her upcoming seventh studio album, titled Alicia.

Keys also announced the dates for her upcoming Alicia — The World Tour.

Check out the tour dates below.

Sept. 2 – Portland, OR @ Theatre of the Clouds at Moda Center